referred to as simply “101”.) No matter what “version” of this work that you are

the conclusion: this is a great resource for everyone, regardless of doctrine and

denomination. Now, let us commence with the Review!

“Christian song is the overflow of the Christian heart. If our hearts are full, our singing will be full.”

Kenneth Osbeck loves music; he loves hymnology; and he loves the Lord Jesus. Sounds like the perfect guy to write this kind of a book! He’s taught music on the collegiate level, and he’s ministered in the local church. To be quite frank: Mr. Osbeck is an expert who knows his stuff.

This collection is exactly what it purports to be: the back stories of the hymns we love so much. At nearly 300 pages, you’ll quickly figure out that the average length of a hymn story is just about 3 pages. Long enough to learn the stories, yet short enough to keep reading.

Many churches have left behind the Good ‘Ole Hymns of the Faith. Not Osbeck. For those who love those grand ole’ hymns, this book will be a real treasure.

It Is Well with My Soul

O For a Thousand Tongues

How Great Thou Art

I Sing the Mighty Power of God

Just As I Am

Silent Night! Holy Night! (Yes, there are several Christmas carols in this collection.)

and 92 others that are absolute classics. Some of the authors he writes about are Fannie Crosby, John Newton, Charles Wesley, and dozens of others.

Osbeck may be a musician; but he writes like a good reporter, or a biographer - not a historian. These aren’t a collection of boring facts strung together; they are stories. They are good stories! And they are good stories told well. Here is an excerpt from “It Is Well With My Soul,” by Horatio Spafford:

Some months prior to the Chicago Fire of 1871, Spafford had invested heavily in real estate on the shore of Lake Michigan, and his holdings were wiped out by this disaster. Just before this he had experienced the death of his son. Desiring a rest for his wife and four daughters as well as wishing to join and assist Moody and Sankey in one of their campaigns in Great Britain, Spafford planned a European trip for his family in 1873. In November of that year, due to unexpected last minute business developments, he had to remain in Chicago; but he sent his wife and four daughters on ahead as scheduled on the S.S. Ville du Havre. He expected to follow in a few days. On November 22 the ship was struck by the Lochearn, an English vessel, and sank in twelve minutes. Several days later the survivors were finally landed at Cardiff, Wales, and Mrs. Spafford cabled her husband, “Saved alone.” Shortly afterward Spafford left by ship to join his bereaved wife. It is speculated that on the sea near the area where it was thought his four daughters had drowned, Spafford penned this text with words so significantly describing his own personal grief-“When sorrows like sea billows roll...”

And just in case you missed it, he’s careful to insert the devotional/spiritual impact for the modern day reader:

It is noteworthy, however, that Spafford does not dwell on the theme of life’s sorrows and trials but focuses attention in the third stanza on the redemptive work of Christ and in the fourth verse anticipates His glorious second coming. Humanly speaking, it is amazing that one could experience such personal tragedies and sorrows as did Horatio Spafford and still be able to say with such convincing clarity, “It is well with my soul.”

Kind of puts the difficulties of our life in a little better perspective, doesn’t it?

I give this book a “Great Resource for Everyone Rating” - which is basically my top rating for a book like this. It’s hard to imagine it being any better.

By the way - this book has been so popular, that Osbeck has released another book called “101 More Hymn Stories” plus several other similar kinds of books.

This comprehensive review is by Dr. David S. Thomason. Copyright 2012. All rights reserved.

Click Here for information other titles in this series

This is one of the true Christian classics of devotional literature written in the 20th Century. If you’re familiar with the Grand ‘Ole Hymns of the Faith, then this book is indispensable reading. It will stir your soul - and make you a better singer!

Great Resource for Everyone 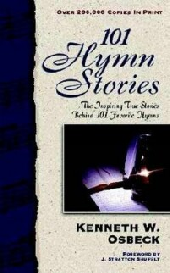